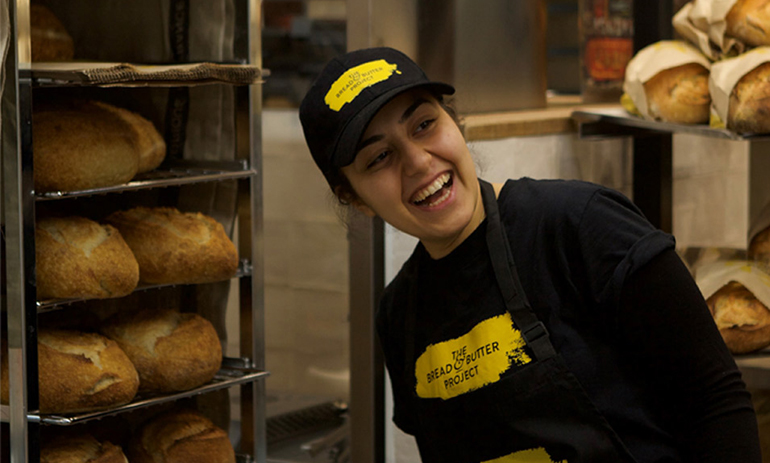 Social enterprise urges Australians to cook for a baker

Australia’s first social enterprise bakery is encouraging people to bond through the simple act of baking bread, as part of a new crowdfunding campaign.

The Bread & Butter project has seen a 40% drop in wholesale cafe and restaurant sales since June last year, hurting the sustainability of its training programs.

To help support this training, the social enterprise has just announced a three-week Bake for a Baker crowdfunding campaign, starting February 28.

The campaign will involve people and businesses across the country who will don their aprons, much like the company’s trainee bakers, and form teams of five.

Once these teams have reached a minimum collective fundraising goal for $250 ($50 per team member), they can receive The Bread & Butter Project’s exclusive bread recipes that are inspired by the cultures of the refugee interns.

The initiative also aims to create a close connection between people working from home, or families and friends separated by the pandemic, with these culinary efforts to be shared on Instagram using the hashtag #bakeforabaker and tagging @thebreadandbutterproject.

Bread & Butter Project CEO Peter Boyd said the campaign allows people to step into the shoes of the company’s refugee trainees and experience the learning process of baking bread.

He said he hopes everyone who attends Bake for a Baker gets a little taste of the wonderful cultures of the refugee trainees, where bread is such an important part of building community.

“For this reason, we will encourage entrants to share their bread creations with family, friends and co-workers,” Boyd said.

“At the same time, the campaign will provide companies and businesses with a great way to restore community and connections between their teams while working from home, especially as they navigate the realities of pandemic-affected workplaces. .

“Most importantly, the campaign will help the Bread & Butter Project raise the funds we need for future cohorts of refugee interns – and especially those fleeing the crisis in Afghanistan – so they can establish fulfilling careers in as the next generation of Australian bakers.”

The top three fundraising teams at the end of the campaign will be invited to a special online graduation gala, hosted by respected Sydney Morning Herald food critic Terry Durack.

Here, the winning teams can present their creations and “graduate” just like the company’s refugee trainees.

The top fundraising team – and up to five of their friends or colleagues – will also take part in an exclusive baking masterclass with celebrity chef Peter Gilmore of Sydney’s Quay and Bennelong restaurants, and his pastry chef Rhiann Mead.

Learn more about the campaign here.

How social enterprise sourcing can contribute to ESG progress