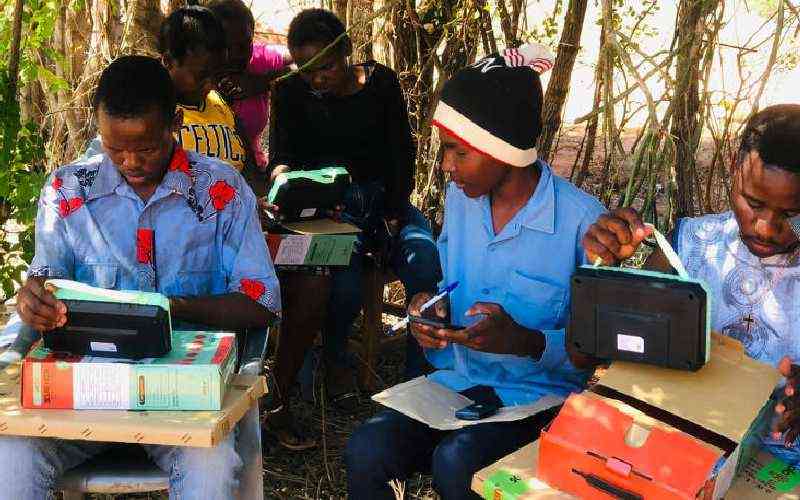 Outside the cluster of mud-walled houses, in total darkness, two dogs are playing. Apart from their occasional yapping, the night is deadly quiet. Beyond the fence, made up of randomly intersecting sticks, there could be elephants or even lions. In this village of Nthunguni, Mtito Andei, animals roam freely at night.

Juma Kilumo, 22, appears from one of the houses, a torch in his mouth, a new tablet and light bulbs in his hand.

He strides to a simple gazebo outside his mother’s kitchen, hangs the light bulb from the gazebo rafters and, with a remote control in hand for a minute, turns on the device in hand, an energy tablet solar called Solar Media.

It is a new device that was introduced to her earlier today by Mama Layla Solar Lights, a Nairobi-based social enterprise responsible for uploading content to the device, in collaboration with Shenzen Solarun Energy Company Ltd.

Kenswed Organisation, a non-profit organization aiming to eradicate poverty, through the Kenswed Vocational Training Center (KVTC), identified the students in need and procured the devices.

This evening, in this remote village which is not connected to the national electricity grid, 20 households have new electronic tablets, three powerful LED bulbs and a solar panel each. Shared between 54 beneficiaries, the tablets, called Solar Media, were developed by the Chinese entrepreneur Susan Li Xia who, during the Covid-19.

He sought a solution for children in remote areas where access to online learning materials and electricity was a challenge. The device is preloaded with information on agriculture, health, skills development, entertainment, and religious and civic education, among others. Users get comprehensive technical skills courses, with information updated every three months.

Months later, Mr. Kilumo and his peers will be tested on the skills they learned from this device.

A partnership with Mama Layla, which runs a women and youth empowerment center, and houses a primary school in partnership with Shelter Children’s Home, in Kibiku, Ngong, gave Li access to Kenyan communities in need of its Solar Media solution. This helped Mama Layla, run by Hanif Ahmed Poona and founded by Roshan Ahmed, Mr Poona’s sister, who has since died, was already manufacturing and distributing solar lamps to help last mile communities.

In the 20-acre farm in Kibiku, Ngong, on which Shelter Children’s Home is located, 10 acres are cultivated. Here they grow onions, kale, spinach, bananas and corn. They also keep bees. The proceeds from the sale of these harvests are used to support the upkeep of the 150 children in the household.

Since 2022, managers of different sections of the farm have been using Solar Media to hone their crop management skills. Jamleck Mutuiri, who is responsible for beekeeping, says he has learned a lot since he started using the gadget.

“I have more knowledge in disease control, pest prevention, cooperation with bees and even their feeding. I even now use lemon oil to treat hives,” he says. From the 91 hives, he could harvest between 100 and 150 kilos of honey every three months in the rainy season.

The onion harvest also yields up to 5,000 kilos each season, with the manager equally optimistic that the lessons he learned on Solar Media have helped boost yields.

Further up the farm, at a bakery, Josphat Mureithi, a hobby baker, can now make scones he couldn’t two years ago, some of which are given to children at home while the rest are sold. The lessons for all this are downloaded to the device.

With a solar panel provided, people living in villages with no electricity and no internet connection can now use Solar Media for skills development and general learning without a hitch.

“We make solar lights to empower women in these areas, and now we’ve gone a step further with this partnership giving us this device – which is the first of its kind,” said Hanif, CEO of Mama Layla.

Small-scale farmers without the skills and information needed to make the most of their agricultural activities are prime targets, alongside a legion of unemployed youth in increasingly desperate situations across the country. The device, which organizes information from various sources to provide comprehensive, accurate and reliable content to users, also contains the Bible and Quran, Hanif says.

He is looking for partnerships so that more content is uploaded for last mile users. KVTC director Kelvin Lillan says that in the Mtito Andei case, where Kenswed identified the need and called interested students to come out and be shown the gadgets, the reception was overwhelming.

“We only bought 20 devices which we are giving out today and look, there are 54 students here so they need to be paired up and then we can see how much they can learn from there,” he says.

This is a pilot test, and through student experiences in its early stages, partners will see what adjustments they need to make to the device to improve its usability. As the distance between our Kenswed institute in Ngong and these students is already a challenge, Kenswed will negotiate a partnership that will help them visit them regularly.

Every three months, as the content of the device is updated and downloaded, the usage will also be analyzed so that the needs can be better adapted to what seems most interesting to the users, and An assessment will be carried out so that those who have improved their skills can have proof of excellence and can obtain jobs at the end of the course.

Students also take an entrepreneurship course so they know how to monetize their new skills.

Mr Hanif says partnerships with organizations such as banks will allow organizations to reach people in the last mile so that when they have completed a course and want to start a business, they know how to access credit.

The idea for Solar Media, says Ms. Li, was born out of the need to make it simple and viable for people in underdeveloped areas to learn for themselves and understand, and use the skills learned.

“We need to do it in the simplest way, and primarily in video, which beats audio, image and text in communication,” she says. “We also used cartoons a lot – it makes it easier to understand and remember.”

She has worked in the solar sector in Africa for 13 years, but it was only during the pandemic that she thought about advancing learning methods for children in rural areas.

The pilot project in Kenya is the first public revelation, with a plan to roll out the first 1,000 units in the near future. “Over the next three years, we hope to distribute Solar Media to 50,000 households, which will be able to increase their income and improve their standard of living. Esther Wavinya, hairdresser, now wants to use the lessons provided in the device on hairdressing to refine her activity.

The same goes for his colleagues Ruth Gerald and Pauline Kala, all three of whom share a single Solar Media device. And although they have smartphones, poor internet connection, lack of charging solutions and high cost of internet make them unable to optimize them for skill development.