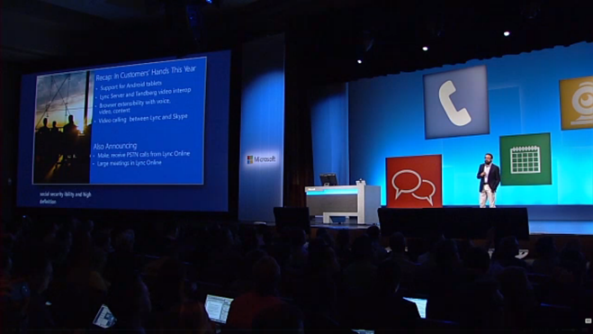 But there’s also a long answer, and, frankly, it’s quite interesting. And from the perspective of Lync Online customers, that’s potentially promising for those who want to keep waiting. So let’s take the time to dissect what Microsoft is now saying that it plans and doesn’t plan to offer regarding the integration of better telephony capabilities into Lync Online.

First of all, a little story. There are two versions of Lync: Lync Server 2013 and Lync Online. (There’s a third actually – one for hosting providers – but let’s forget that because that’s not the focus of what we’re talking about now.)

â€¢ Lync Server supports instant messaging, presence, conferencing, and all of those cool features; Lync Online has it all, too.

The corporate voice in Lync Online was a nod to Microsoft back in 2011. In February 2013, former Skype president Tony Bates said Lync Online would have Enterprise Voice in the the next 18 months. In July 2013, Vice President Derek Burney reiterated â€œMicrosoft’s commitment for Enterprise Voice in Lync Online. â€But in his Lync Conference 2014 keynote, Lync’s prodigal leader Gurdeep Singh Pall said, â€œThis year we will be offering the ability to get PSTN inbound and outbound phone numbers and calls in Lync Online. This is what customers have asked for, and we will make it happen.

Business Voice Calls vs. RTC
Enterprise Voice has a very specific meaning in the Lync language, so let’s leave it Microsoft explains it:

Enterprise Voice is vitally important to Microsoft’s unified communications strategy, as it is what makes Lync Server a viable alternative to a traditional on-premises PBX. This is what sets Lync Server up against Cisco UC Manager, Avaya Aura Communications Manager, and the myriad of other enterprise voice systems available. Lync with Enterprise Voice has PBX calling features – not hundreds or even dozens, but enough to spark business interest. It has response groups – not precisely ACD but ACD-ish. It features call admission control, which helps deliver professional-grade voice over low-bandwidth networks. And there’s that bit that I put in italics – the ability to dial old normal phone numbers … i.e. PSTN calls.

As I mentioned, Enterprise Voice is the reason businesses are choosing (or at least considering) Lync Server as an alternative to a traditional PBX. The lack of corporate voice is the reason businesses can’t use – or even consider using – Lync Online as an alternative to a hosted PBX service. If and when Microsoft integrates the full set of Enterprise Voice features into Lync Online, it might have something competitive with hosted PBX services.

So what does the PSTN call? As Pall and others at the Lync conference explained, it felt like little more than a dialer, as well as being able to have a phone number associated with an end user’s Lync account. The phone numbers will come from one of Microsoft’s four partner carriers, and when someone dials that number, a Lync Online user can answer the call with their Lync client. Users can also make calls to PSTN numbers.

Next page: More than PSTN calls, less than enterprise voice

More than PSTN calls, less than Enterprise Voice
So this is it? Not only will Lync Online users be able to set up PC-to-PC voice connections, but will also be able to make and receive calls to PSTN? Nothing more than that?

Well, it turns out that it’s not just PSTN calls that will be added to Lync Online. I first heard this from some Microsoft partners at the Lync conference and had it confirmed by Microsoft representatives at Enterprise Connect last month.

To understand what besides PSTN calls will be added to Lync Online, a little more history …

There are a lot of cool things in Plan 3’s feature list. Make / receive calls from any phone, so PSTN calls like what’s now on the Lync Online roadmap. Voicemail and user call controls such as call hold, transfer, and transfer, so some elements of Enterprise Voice that weren’t actually noted in Microsoft’s PSTN calls in the Lync announcement Online.

The mention of Jajah is also significant. The late Plan 3 dates back to when Microsoft announcement that Jajah would be the first of several providers to integrate their Internet telephony services with Lync Online to enable PSTN calls. But Jajah crashed and burned. In mid-2013, he abandoned the integration of Lync Online and in early 2014 all of its services to close completely. Microsoft had never signed up to other service providers. Lync Online has therefore lost its one and only way to connect to the PSTN, and Plan 3, with its “Enterprise Voice lite” feature set, has been quietly scuttled.

Microsoft is now planning to restore not only PSTN calls, but also some or all of the “Enterprise Voice lite” features of Plan 3. I first heard about this in a hallway conversation with Microsoft partners during the Lync conference. Those working with Microsoft to make PSTN calls in Lync Online a reality have told me that users can certainly forward, forward, and handle calls originating from PSTN, and simultaneous ringing will certainly be possible with Lync Online. So maybe it’s the return of Plan 3 in all its glory. No call admission control, no Response Groups, but a set of PBX-like features that go beyond simple PSTN calls.

So when will Lync Online get PSTN calls and all that other good stuff? Microsoft doesn’t commit to delivery dates, but from what I’ve heard, it will be available from four telecom partners later this year. Later – in 2015 – it will be available from Microsoft itself. I have discovered a number of details about the two (or three, depending on who you ask) the means by which carriers will be able to provide PSTN calls for Lync Online. I’ve detailed them, along with the time frame in which the services are likely to become available, in a short Ovum report that Knowledge Center subscribers can read. here.

Repressed request
Lync Online’s lack of corporate voice – or even just PSTN calling and the EV feature subset we’re talking about here – has long frustrated me as an analyst. While Lync Server can be a viable alternative to an on-premises PBX, I don’t see why Microsoft is taking so long to make Lync Online an equally viable alternative to a hosted PBX service.

But I’ll tell you who’s even more frustrated: Lync Online customers. After posting my Ovum report, one of our clients, an IT infrastructure manager at a Japanese automotive supplier with nearly 50 locations, emailed me about using Lync Online by his company.

Although manufacturing centers have a difficult network environment with limited bandwidth and high access line costs, â€œLync Online has proven to be a robust solution to keep these [sites] connected, “he wrote.” However, a constant cause of frustration … has been the lack of PSTN access which is only compounded by Microsoft’s lack of clear direction and timeline for a solution and by the presence of the PSTN on the Skype platform. “The ability to call the PSTN through Skype,” he continued, “makes it a concept our users are very aware of, but [with Lync Online it is] as far as ever in terms of delivery dates. ”

The Lync Online customers I spoke with at the Lync conference are also eager to call PSTN. It used to be an option, and they want it to be an option again. They are encouraged that Microsoft is considering reinstating it as an option. They are upset that it is not yet available, that it will not be available for such a long time, and that Microsoft does not commit to a specific delivery date. But I have a feeling that once Microsoft ships it, Lync Online customers will be happy.