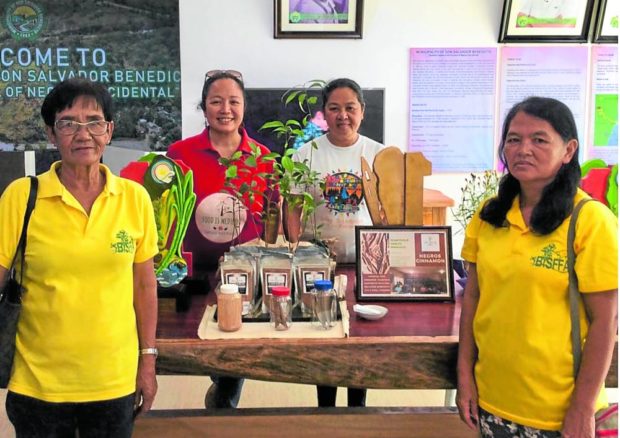 Cinnamon is one of the most important spices in the world, a condiment par excellence that discerning households use to enhance the flavor and aroma of food and drink. Its essential oil is also widely used for personal care products.

The Philippines has 19–21 native species of cinnamon; unfortunately, they are among the endangered species identified by the IUCN Red List of Threatened Species. The country buys 98% of its cinnamon needs abroad.

Bacolod-based social entrepreneur November Canieso-Yeo discovered this sad reality after starting a blog to share her lessons and experiences in organic home gardening. Armed with her love for the aroma and flavor of cinnamon, Canieso-Yeo launched her advocacy for the conservation of Philippine cinnamon in 2018.

Canieso-Yeo is the Founder and CEO of Plantsville Health, a social enterprise that champions the conservation of local cinnamon species by planting them with local farmers, purchasing their products, and developing healthy products made from Philippine cinnamon and cinnamon. other aromatics. In addition to conservation, social enterprise tackles livelihood, health and climate change issues.

Since 2018, 76 farmers have planted 14,133 Philippine cinnamon plants with the help of Plantsville Health. Before it entered the community, it was estimated that there were only 50 mother trees left. The inhabitants used to cut down the cinnamon trees to transform them into uling or charcoal; but now they are actively involved in conservation efforts.

Plantsville Health found seven species of cinnamon in the town of Don Salvador Benedicto. These are considered important scientific findings as they established where these species naturally grow in the Philippines.

Canieso-Yeo says Philippine cinnamon bark can be sustainably harvested from the tree using a peeling and coppicing technique. In forest management, coppicing refers to the traditional method of cutting trees down to ground level to encourage new growth. Trees don’t die; on the contrary, they regenerate with 10 times more stems and leaves.

Plantsville Health emerged as one of the top winners of the Social Innovation Challenge for Agriculture organized by the non-profit organization World Vision Philippines in 2019. It won the Moonshot Trabaho, Negosyo, Konsyumer Pitching competition from the Ministry of Trade and Industry last year.

He was also a recipient of the Department of Science and Technology’s Women Helping Women: Innovating Social Enterprise Program. The social enterprise was among those representing the Philippines at the recent Belt and Road Summit held in Hong Kong.

Plantsville Health is among the companies participating in the upcoming Negros Trade Show, which will take place September 20-25 at the Glorietta Activity Center in Makati City. Organized by the Negros Producers Association, the 36th edition of the Negros Trade Fair, the oldest provincially-organized trade show in the nation, marks the return of its in-person format.

As more consumers buy local cinnamon, more farmers are encouraged to plant trees to harvest the bark and leaves, says Plantsville Health. The social enterprise also hopes that more Filipinos will know that we have native species of cinnamon and grow them in their gardens and farms.