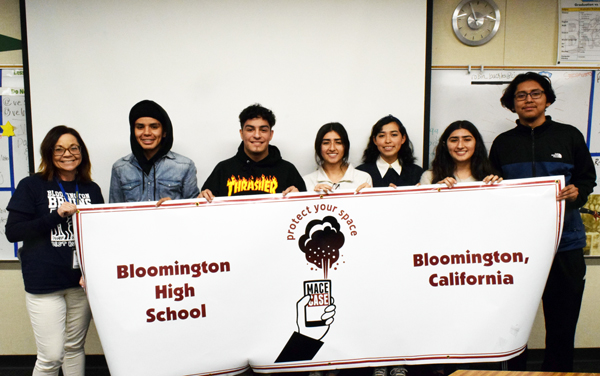 For the second time, a team from Bloomington High School will participate in the National Virtual Enterprise Business Plan Competition in New York City.

The school’s Mace Case Virtual Enterprise will attend the Youth Business Summit 2020 from April 21-23 in New York City. The team secured the spot after placing fifth in the state competition at Bakersfield earlier this month. Another BHS team, Life Cycle, also reached the state-level final, placing 8e. The top six California teams are eligible to compete at the national level.

Two years ago, Bloomington’s High Rise Gardens Virtual Business Team entered the National Business Plan Competition and placed in the top 6 teams in the country. This year’s winning team are working hard to do even better than their successful predecessors, and hope to keep getting better and better.

â€œIt’s amazing how much we have changed and progressed,â€ noted Jeanne Gonzalez, a member of the team, who is the CEO of Mace Case.

“We never thought we would go this far, especially in New York City,” added Jazmin Gonzalez, member of the team (and twin sister of Jeanne).

Virtual enterprise business plan competitions involve teams of students developing virtual businesses. Students write carefully researched business plans, then make a â€œpitchâ€ for their product in front of expert juries. Students are also required to answer detailed questions about their business on everything from their finances to how global events and economic conditions may affect the success of their business.

The virtual product offered by the Mace Case company is a variety of cases for holding pepper spray containers on cell phones. Although there is no actual prototype, the team did share designs in their business plan. They also had to include financial data, a marketing plan, industry analysis, organization chart, safety and liability information and much more.

The idea for the product arose out of discussions about security issues from people focused on their phones and not paying attention to their surroundings.

Students first competed regionally in Redlands, then moved on to state competition.

“The most exciting part was going from round to round,” said team member Emilio Arriaga.

When it was announced that the team would go to the national championships, â€œI started to cry,â€ recalls team member Jocelyn Paz. â€œI was like ‘no. no.’ It’s always the same teams that always go to New York.

Along the way, the team must have heard constructive criticism. Teacher Robin Buckles said she was impressed they took the judges’ comments to heart and made the necessary adjustments instead of getting angry or upset over the contribution.

â€œDon’t take it personally. It’s only business, â€said team member Samuel Moreno, whose older brother, Enrique, was a member of the winning Virtual Enterprise team in 2018.

Beyond winning and being able to compete on a national stage, team members say participating in the competition and the entrepreneurship journey has helped them grow as individuals and gain insights. skills that will help them throughout their lives.

â€œBefore, I didn’t really talk much. It helped me find a job and improve my social skills, â€said Jazmin, who added that she learned how to write a successful resume.

â€œIt helps you prepare for real-life scenarios,â€ added Samuel, adding that he had developed strong communication skills and learned the importance of staying focused on his task.

Team members also said it was nice to see the adults taking them seriously and treating them like professionals. â€œYou feel like you’ve grown up,â€ said Ivan Herrera, CFO.