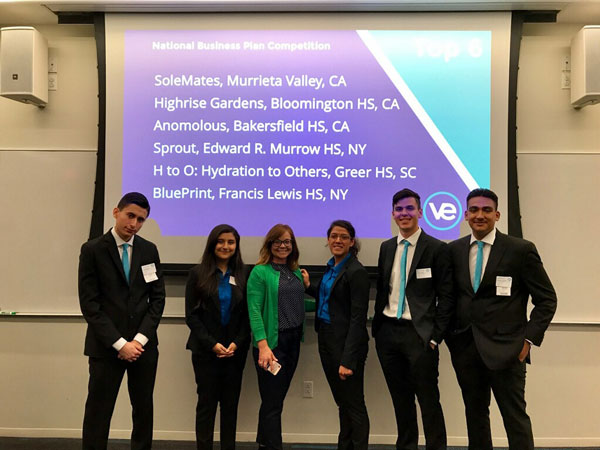 Kudos to the students of Bloomington High School Virtual Enterprise, who were among six teams from across the state chosen to enter the National Business Plan Competition at the Virtual Enterprises International Youth Business Summit, April 16-18 in New York City. The BHS Highrise Gardens team was one of 220 teams from 150 schools representing 18 states and 10 countries.

Although the team didn’t win the championship, they have so much to be proud of – they started locally with 550 teams, and being selected in the country’s top 6 is amazing!

Highrise Gardens was one of six teams across the state chosen to participate in the Virtual Enterprises International Youth Business Summit national business plan competition, which took place April 16-18 in New York City. The team was among 220 teams from 150 schools representing 18 states and 10 countries.

This is the first time that BHS has won at the state level and moved to nationals. Highrise Gardens also had the highest score in the state in the written portion of the contest – with 101 out of 100 points.

Another BHS team – Novel Pursuit – ranked among the top 16 teams in the state. A total of 42 participated.

“I’m very excited for them,” added Sandy Torres, principal of Bloomington High School. “Taking a whole new idea and bringing it to where they’re going in New York is an incredible accomplishment.”

The team members are still a little overwhelmed by their accomplishment.

Highrise Gardens Virtual Business Centers focus on aeroponics – growing plants vertically without soil; an industry that students believe would be beneficial in big cities. The idea is that city dwellers can grow their own healthy crops, even if they don’t have room for a traditional garden. The team members came up with the idea after seeing a video highlighting the need to bring crops and greenery to cityscapes with little outdoor space.

The competition is fierce, Ms. Buckles noted. Most teams spend up to two years preparing. BHS worked on their project for four months. For all but one of the team members, this was their first time competing at the state level.

â€œIt was new and scary,â€ Daniela said of her state competition experience. â€œNew York is going to be a new, bigger experience. We look forward to this.

The virtual business competition started locally with students from our area last November in Redlands. Virtual Enterprise encompasses a variety of business-themed competition areas such as marketing plans, elevator pitches, sales catalogs, and just about every facet of running a business. The business plan competition is one of the most difficult, because it is essentially â€œa thesisâ€, noted Ms. Buckles.

Students not only need to come up with a business that will meet a need, but they also need to elect company executives, budget, project costs and revenues, develop a marketing plan, and have just about everything they need. ‘a real business would haveâ€¦ except virtually.

After developing the full plan, members then had to â€œpresentâ€ their idea to a panel of seven expert judges. The questions asked by the judges were quite difficult and the team members had to answer with precision and confidence. Some of the hardest questions were about finances.

â€œWe weren’t seen as kids making something up,â€ noted Enrique. “They saw us as a real business.”

To make sure they were prepared, each team member rehearsed each other’s parts, so they could support each other in the high pressure presentation. The experience strengthens critical thinking, research and writing skills as well as â€œsoft skills,â€ Alejandro added.

â€œWe also had to partner (with the judges),â€ he said.

Whatever the result at the national championships, Roxanna said the experience was one she will never forget.

â€œThe whole experience really brought this team together,â€ she said. â€œIt made us realize that we can do whatever we plan to do. “